The Linear Oppression of Note-taking Apps

Every major note-taking app on the market works one way: linearly, in text.

Notion
,
Roam
,
Evernote
,
OneNote
,
Bear
,
Obsidian
. They are all centred around writing text documents that flow from left-to-right, then top-to-bottom; the way all text works in English. Even if they support other languages, you'd still write Arabic or Hebrew or Urdu linearly, just right-to-left.

You might say this is what defines a note; it is a chunk of written text, presented as a small piece of digital paper. It's pretending to be a real piece of paper, but without many of the features that make real paper useful. Like the ability make marks on it that are not simply words in a straight line. 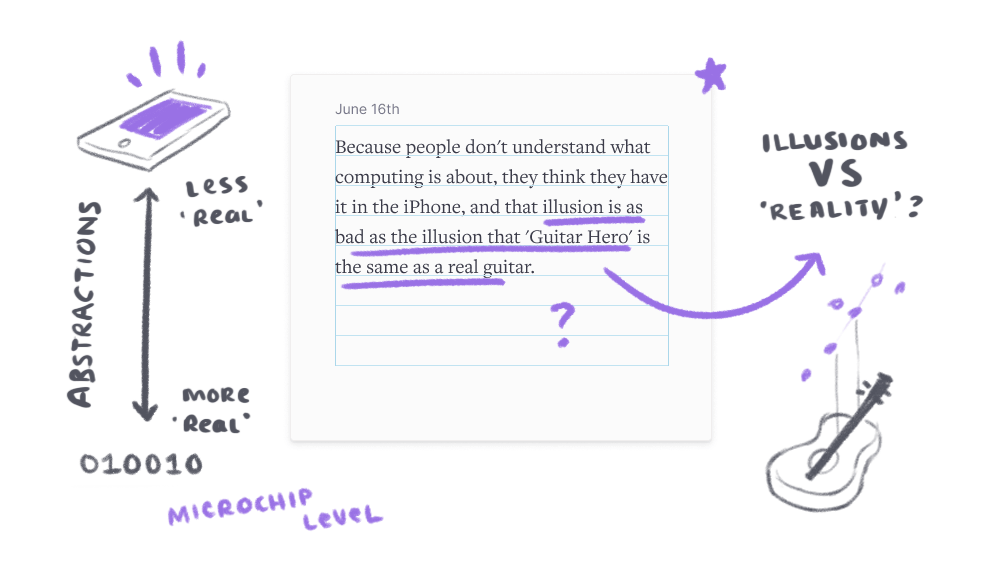 I find it odd that few apps put sincere effort into becoming more paper-like. Most are too busy trying to become more hyper, in the hyper-text sense. They pride themselves on their multi-device compatibility, cloud synchronicity, and API integration automations. None of them question the central organising medium of linear text.

You're welcome to pop them "inline", like a pseudo-text element that inconveniently isn't subscribing to the rules. But you're going to have to make your images elsewhere. This is a note-taking app, not a drawing app (we have to wonder when those became two separate things). You'll have to draw somewhere else. Probably on another device. Which you'll have to buy separately. And yes, it will be prohibitively expensive. Unless you've found a way to draw by tapping out lines with your keyboard.

If you're lucky, your particular note-taking app might let you change the size of this image. Good luck trying to place two images next to each other though. Multi-column layouts and horizontal movement are beyond our current note-taking capacities.

Physical space is our third-class citizen. Your notes are only allowed to move to the right and down. You cannot move left, upwards, diagonally, in front, behind, or past Go.

Unless
you
want
to
get
weird
and
hacky
with the
formatting

You cannot freely drag things around and place them wherever you like. That would make it too much like the real world, where we can place one sticky note to the left of another, place both above a small notecard, arrange these next to a book with sticky notes inside it, and pile it all on top a ripped out page from a notebook covered in haphazard scribbles and doodles, half of them upside-down.

One wonders how we haven't hung ourselves with this amount of spatial freedom.

So, who is to blame for our linear, textual predicament?

The designers who invented the paper-based desktop metaphor that haunts all modern interface design? The users who behave like blind, inconsiderate drunks when presented with any slightly novel note-taking system? The venture capitalists who exclusively fund these predictable apps? The entire educational system for its incessant focus on textual literacy over spatial and visual literacy?

Surely, Gutenberg has something to answer for.

Up until recently, the idea of Digital Gardening was unknown outside the world of web development. If you're new to the idea of digital gardening I suggest you read my essay on the history and…