In the story of Echo and Narcissus, a chatty mountain nymph and a self-obsessed hunter both die from unhealthy obsessions. Echo won't shut up, annoys the wrong goddess, and ends up cursed to repeat the words of others; she's unable to say anything original. She then falls in love with Narcissus, a pretty boy who spends his whole day staring at his reflection and is wholly unimpressed with the woman repeating everything he says. In the end, they both spend so much time staring at Narcissus they forget to eat, bathe, or sleep and slowly waste away. 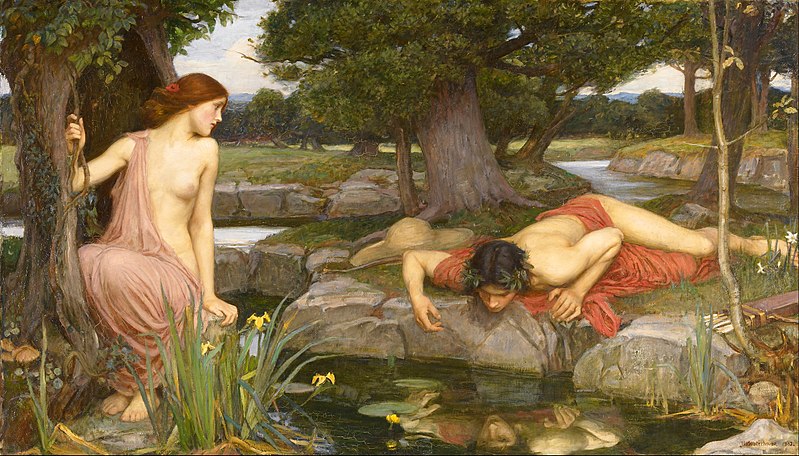 This delightful story is a good reminder to eat regular snacks. It's also a fitting metaphor for the new club I'm starting up at

Echo & Narcissus Writing Club
is all about mimicking the work of exceptional writers in order to learn from them.

This might sound scandalous depending on your understanding of creativity. I'm personally a subscriber to the

everything is a remix
and
great artists steal
schools of thought.

I used to think copying was unseemly before one of my writing professors in college filled me in on the big, unkept secret. He handed us a small trove of writing samples from folks like

Joan Didion
,
John McPhee
,
Barbara Kingsolver
, and
Ernest Hemingway
. Essentially a Who's Who of New Yorker essayists. We had to copy out their work, then write our own pieces using the copied sentences as 'templates.'

You would take a Didion sentence like 'Only the very young and the very old may recount their dreams at breakfast, dwell upon self, interrupt with memories of beach picnics and favorite Liberty lawn dresses and the rainbow trout in a creek near Colorado Springs,' and learn how to see it as "Only the ____ and the ____ may ____, ____, ____ and ____." A reusable format for pointing out similarities between two distinct things.

The point is not to rip off Didion, but to begin to see how she uses nouns. Where she places verbs. How she handles semi-colons. Where she begins a story and where she ends it. How she asks a question. How she makes you doubt her credibility as a narrator.

Copying forces you to look at writing techniques under a microscope. You stop seeing your favourite authors as magical beings who pump out great work from behind a veil. Everything you need to know about their process and how to write like them is already on the page in front of you.

Great writers become great by closely studying and copying other great writers. This is how cultural knowledge works. We learn the foundational skills from each other first, and then get all weird and experimental later on once the normal rules become boring.

If you have a writing practice of any kind, and feel the urge to improve it, this club is for you. You will need to bring along a Narcissus - a writer whose work you love and want to emulate. If you are bad at making choices, you can bring along two.

We'll keep it casual - the weekly meetings are to chat, compare what we've learned, and give each other feedback in pairs. There won't be lectures or lots of instruction. As a peer learning group, it's simply a way to gather together and support each other on our journey to being less-crap-writers.

It will require a commitment to write. The writing doesn't have to be good or profound or SEO-optimised. It simply needs to try and copy the style of your Narcissus. We'll write 500 word pieces for the first 4 weeks, and 1000+ words in the final week.

It also costs 35 USD. I find a little skin in the game helps everyone show up on time. Committed folks make the experience better for everyone.

The club
is now all filled up! Thanks to everyone that quickly joined. Excited to copycat some great authors together.

If all goes well with this first cohort, I may run more in the future.